– Letters to a Young Muslim

I was reading a book in bed tonight and a paragraph struck me. The author, Omar Saif Ghobash, was recounting about his faint memory of his father who had died when he was six. He recounted how he grew up only knowing his father from the stories close friends and family had told him. And that as those people passed on, his memory or his knowledge of his father faded and were lost with them.

What had struck me while reading this chapter was how he highlighted that we remember people in our lives as how we construct them. We listen to old stories, we observe behavior and then draw conclusions. We piece together an image of what these people were like to us. But somehow I feel like the memory of my grandfather is slipping away in my mind. 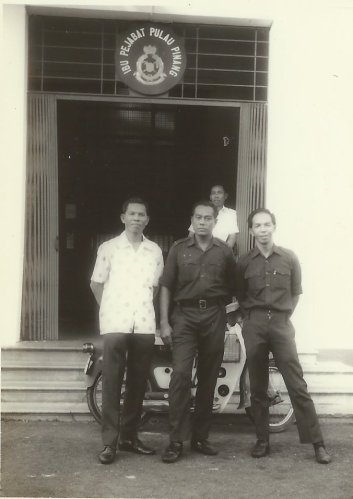 (my grandfather was a policeman)

It’s weird because I wasn’t six when he passed. I was about to turn 21 actually. I still remember the day he passed as if it was just yesterday. I remembered what I was doing. I remembered where I was. My biggest regret till this day is that I didn’t get a goodbye. Well, most of us don’t get a final goodbye. I was even there for his funeral. (Darn, time zones) His death is by far the most tragic loss I had ever experienced. He was the closest relative I had lost. It was just one of those you knew it was coming but you try to ignore it. He was 85 and had every disease.

The image of him still comes into my dreams, waking up with drenched pillowcases and swollen eyes. It was like my brain was desperately trying to keep the memory of him alive. I can remember emerald green hair gel that had hints of lavender. His black and white hair slicked back with an SIA comb. The way he says hello like Mr. Bean. The bunion on his feet that I inherited. But each time the memory of him floats into my mind, I feel like I forget certain details. Dreams of him get ambiguous. Like the image of him is slowly slipping away while my mind tries to remember how he was like.

A person lives on only in the fading memories of those who knew him. I guess my grandfather lives on in the dinner table conversations I have. Or when I see his younger brother at family events. But hopefully, my memory of him is more than a text I received at midnight while watching tv. (You know what sucks: crying in an airplane bathroom from Los Angeles to Singapore. 20 hours of silent crying!)

My memory of him is the husband and father who brought his wife and baby from Malaysia to Singapore for a brighter future. The man who had held off his doctors for more than 10 years from amputating his diabetic leg. He who gave me an allowance when my dad was unemployed. He bought me my first handphone and paid the bills. He was kind, generous and above all, a true definition of a husband, father, and grandfather. What a special time we had together. He was truly a cool Atok.

PS: His name is spelled as Yaacob instead of Yaakob because of the (darn) British administrators.

I write, I photograph, I film and I design. Content Creator and Social Media Strategist. View all posts by inshimajid